The Word of One Tarot 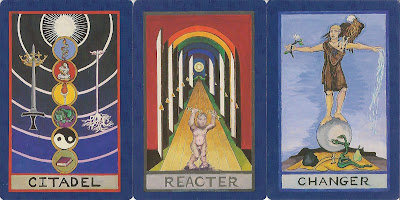 Notes:
John Starr Cooke was an American mystic and spiritual teacher who influenced the development of the counterculture movement that emerged in San Francisco during the sixties.

T- The New Tarot for the Aquarian Age came into being, when a group of people gathered around John Starr Cooke, in 1962-63 received instructions about how to create the tarot from using an Ouija-board. John Star Cooke and his co-worker, Rosalind Sharpe, created an actual deck, that was published in 1969.


John Starr Cooke died  in 1976. In 1979 his sister Alice Cooke Kent published Communify - A Game consisting of a black and white edition of the majors from "T" together with two other black and white major arcana decks.

One of the other two major sets is called The Atlantean Tarot, whose imagery was drawn by John Starr Cooke himself, and inspired by his wife's dreams. The second, named Medieval Gypsy was drawn by Rosalind Sharpe and is based on John Star Cooke's study of the traditional European tarot patterns.

In 1992 a re-edition of the three decks was published under the name of The Word of One, which includes not only a full 79-card color reprint of T- The New Tarot, but also a colored edition of the Medieval Gypsy Tarot plus the negative printed Atlantean Tarot.

The Atlantean and Medieval decks could be used separately or combined into the larger deck, since all the cards have the same back design.

T- The New Tarot has no numbers on the Majors, they have been renamed, and the imagery is non-traditional. The pips arrange the suit symbols into geometric patterns. The suits are serpens (wands), pears (cups), blades (swords) and stones (pentacles) The court cards use different  kinds of symbolic objects as part of the design.

The packing is a solid cardboard box, which also contains the 70 page booklet .