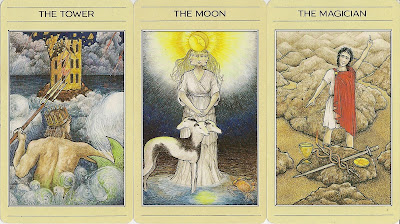 Notes:
The Major Arcana depict Greek gods or demi-gods and keep the traditional names but are unnumbered.The suits carry the traditional designations of wands, cups, swords and pentacles. Each suit is based on a Greek myth and the cards from the suit tell the story as they progress from Ace through ten.

Cups tell the story of Psyche and Eros, Wands tell of Jason and the Golden Fleece, Swords tell the story of Orestes and The Curse of the House of Atreus and Pentacles tell of Daedalus. While each suit is tied to a story, we still find scenes that are similar to those in the Waite-Smith deck.

The deck seems to be published by many different publishers in 1986, there is an edition by Fireside mentioned on aeclectic, one by  Simon and Shuster (USA) mentioned by Kaplan, one by Century Hutchinson (UK) and mine by Eddison-Sadd. They all have slightly different backs, some black with gold embleme as mine, some purple or blue. Mine came with a hardcover book, some others came with a softcover book
.
Eingestellt von eno um 22:04