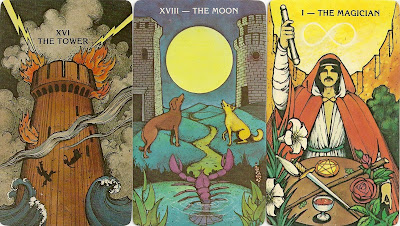 Notes:
The Morgan-Greer Tarot was originally published by Morgan Press in 1979. Morgan and Morgan declared bankruptcy in 1975, but continue publishing decks and books up to 1985. The deck was later published by U.S. Games Systems. This edition is the "transitional edition", it was still printed by Morgan Press but already distributed by US Games- and thus it must be from 1985 or older. 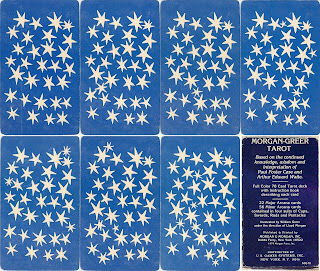 The cards have seven different star patterns on their backs. These are the same patterns (which are on the same cards) as in the last edition by Morgan with the two-piece box. Coredil classified the star patterns of the last Morgan edition in this thread on aeclectic.