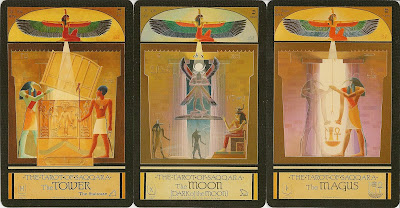 Notes:
Donald Beaman is a professor of theatrical design at Boston University. On a visit to Saqqara in 1981 he was inspired to create a Tarot on the basis of ancient Egyptian religion.

Saqqara was the first pyramid built in Egypt and was probably designed by Imhotep. Beaman saw the floorplan of the entrance hall, the Double Hallway of Ma'at, as a series of gateways that could be assigned  to the Major Arcana of the tarot.

Each Major Arcana has in the background a drawing showing a reconstructed version of the gateways in the hall. The drawings were inspired by those of Lucie Lamy, who illustrated the works of R.A. Schwaller de Lubicz and from the illustrations in the works of Sir Wallis Budge. In the upper part of each Major Arcana from left to right are a Coptic letter, an image of the goddess Ma'at, a Hebrew letter and a hieroglyphic of the name of Ma'at. At the bottom a major deity is named on the left of most cards and a talisman is shown on the right.

The four suits are ankh for wands-ruled by Isis, neb for cups -ruled by Nephthys, uas for swords- ruled by Set and djed for pentacles-ruled by Osiris.

The Tarot of Saqqara came with four extra-cards: 00 The Double Hallway of Ma'at, 22 Ayin, 23 Categories and 24 Life in Death.

Beaman's original paintings are composed on 36” x 52” wooden art board using acrylic, silver and gold leaf paints. The deck was designed in 1985,first issued in 2006 on a CD-Rom, with the Minor arcana also provided as a coloured version. In 2012 it was produced by 'nlitn! media group as a deck of cards.
Eingestellt von eno um 12:37