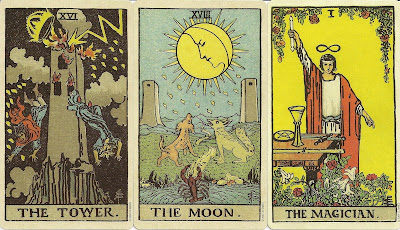 Notes:
The Commemorative Set is a rather huge package. It included two books, the 78 cards and assorted extras, such as a little blue organza bag  for storing the deck, a fold out with tarot spreads as well as some postcards and pictures.

One book is Waite's "The Pictorial Key to the Tarot" except that the illustrations are not included (!).  The book is obviously a photographic reprint based upon either the 1910 or the 1922 edition; which one isn't mentioned. The missing pages with illustrations have forced a renumbering of the text pages, which makes this edition impossible to be used as a reference.

The other book, "The Artwork and Times of Pamela Colman Smith" by Stuart R. Kaplan is a small biography. Pamela Colman Smith's life and family history are thoroughly covered and many colour illustrations of her art, most of them from Mr. Kaplan's own collection but also pieces from other sources are displayed throughout the book with notes that help the reader learn about the mediums that Colman-Smith worked with throughout her life (watercolor, ink, pencil, etc.) as well as all the different places where her work was featured (book illustrations,  magazines, etc.)

This deck is obviously a reprint of the same original `roses and lilies' deck from Kaplan's collection that was already used for the Original Rider Waite Tarot , but  the back pattern, which gave this edition its popular name, has disappeared to be substituted by one single `Irish rose' flanked by a stylized version of Smith's  signature.

One major reproduction problem with this edition is that  the coloured background areas, particularly  the blue and grey areas are rather muddy and with larger grains than the original.
Eingestellt von eno um 16:09