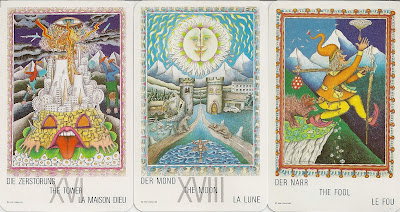 Notes:
Wegmüller grew up within the Rom Gipsy culture of Switzerland, where he was shown his first Tarot deck. Like his friend Sergius Golowin he believes that the Tarot is closely connected to the history of the Gipsies.

Each of the Major Arcana has  a different border drawn into the design. Many of the Minors referred to legends of the gypsy-culture.

The card titles are printed in English, French and German. The back has a geometrical design in blue and white.
Eingestellt von eno um 18:27