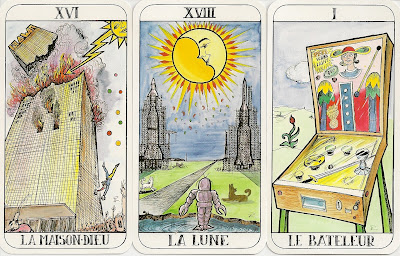 Notes:
Pino Zac is the pseudonym of the Italian cartoonist Giuseppe Zaccaria. He studied architecture in Rome, before going into illustrating. He made his debut in 1950, with Gato Filippo – the first comic strip ever to be carried by a newspaper in Italy.

The images of this deck show a humorous depiction of life in the year 2000, as envisioned by artist Pino Zac in 1981. Illustrations are rendered in a cartoon-like style.

The backs have a swirling design in different shades of blue.
Eingestellt von eno um 02:20