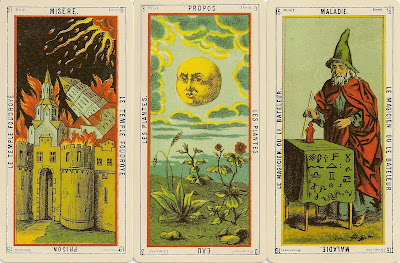 Notes:
This Etteilla  type deck was originally published by Delarue of Paris around the turn of the century. The tax stamp on the two of swords was valid from 1890 to 1917. The original title was 78 Tarots Egyptiens Grand Jeu de L'Oracle des Dames. A case for the deck in the British Museum indicates that the designer was G. Regamey and the lithographer was Haugard-Mauge.

The reprint was issued 1985 by Dusserre with a pink and white geometrical back design. It was a reproduction of a deck in the Bibliotheque Nationale De Paris