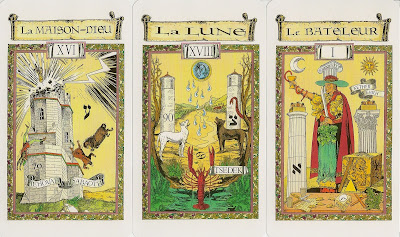 Notes:
Willy Vassaux is  a French cartoonist, well known for his comic book histories of the battles of World War II. This deck was created in 1995 and first named  Tarot des Grands Inities du Moyen Age (Tarot of the Great Initiates of the Middle Ages). It was mentioned in Kaplan's Encyclopedia as an unpublished Tarot design. In 1999 it was published by Dervy as Le Tarot des Templiers (Tarot of the Templars).

It was rendered in pen and ink and has Kabbalistic references and other symbols worked into the figures and background. Trumps I through X are associated with their corresponding Sephiroth, indicated on small banners. Other Hebrew words are found on banners as well.

Card titles are in French. La Justice is VIII and La Force is XI.The pips are illustrated with suit emblems and ornate floral designs. Suits are Baton, d'Epee, Denier, and Coupe. The court cards consist of the Valet (Servant), Cavalier (Knight), Reyne (Queen) and Roy (King). The costumes and locations are probably more theatrical fantasy than historical fact. Heraldic crests have been added into many of the designs.

It was packaged as both a single deck (with no LWB) and a book and deck set (which includes a 160-page French only book by Jean-Louis Victor) . Mine is the single deck edition. Parts of the book are translated into English by Marc Filipas and can be found at pasteboardmasquerade.