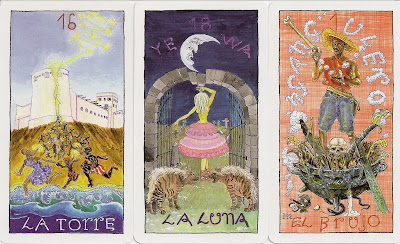 Notes:
Anthropoligist and writer Tata Emanuele Coltro Guidi conceptualized this deck, seeking to link the deities, faith, spirituality, and practices of Cuban Santeria (Regla de Ocha or Regla Lukumi) into the framework of occult tarot. The illustrations were rendered by Luigi Scapini.

Each card is dedicated to an Orisha, an Elder in the religion, or a certain Pataki. A Pataki is a tale that explains the life of an Orisha, or a situation in the Orishas life that teaches a moral lesson. For example the Enamorados, "The Lovers" depicts the tale of Chango, Ochun and Obba; how Ochun tricked Obba into slicing her ear and placing it into Chango's food.

The Majors have Spanish titles over which the symbols and the name of the Afro-Cuban Orisha are superimposed . The four suits are: Bastos for Wands, Copas for Cups, Espadas for Swords and Oros for Coins. The court cards are: Rey, the King; Reina, the Queen; Caballo, the Knight and Sota for the Page.

The reversible backs show the believed Ancestors Santero and Santera, Negro Fransisco and Negra Thomasa, separated by Cowrie Shells on a red background.