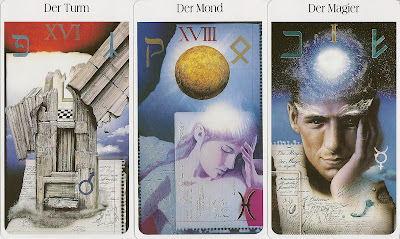 Notes:
Röhrig created the 78 tarot pictures from 1990-1992. The first German edition of the tarot deck was published in 1993 by Aquamarin Verlag. It came with a book by Francesca Marzano-Fritz. In the first edition the Hanged Man and the Princess of Cups show genitalia. In all later editions they wear panties.

Mine was the 2010 edition, which came with a book by ROE & Kirsten Buchholzer. The cards are large size, 90 x 162 mm and, despite looking like a collage, they are created using an air brush technique. The artist included sketches and writing on the cards—mostly on lined notebook paper renderings, but also on the component images themselves to incorporate keywords and foreign language titles.

Each of the Major Arcana cards depicts a Hebrew letter, astrological glyph, and rune symbol. These are explained in the accompanying book. The Major Arcana have elements of RWS : Strength remains in position VIII and Justice in position XI; there is Temperance instead of Art, and The Judgment instead of The Aeon — although The Magus does not change to The Magician. 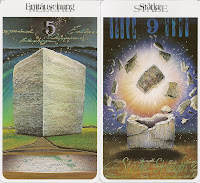 The suits are Disks, Swords, Cups, and Wands, with the Court titles following the Princess, Prince, Queen, and Knight tradition. At the top of each fully illustrated Minor Arcana card, the suit name is displayed in light gray,  while the keyword is superimposed in dark black. For the most part, the Minor Arcana share the same names as the Thoth Tarot, i.e. the Five of Cups is Disappointment, the Nine of Wands is Strength.

The backs are non-reversible, and depict a surreal image of water or space in blues, violet, and silver.
Eingestellt von eno um 19:32