Notes:
Misuzu Itateyama is an illustrator based in Fukuoka City. She was inspired by ancient Japanese culture, Buddhist art and Ukiyo-e. The deck on her website has a copyright 2007, my printed edition is from 2012.

The art is watercolor with elegant black lines of Chinese ink.

The deck came in a cardboard box with a Japanese only LWB and two extra cards. The English title on the box says "Japanese Tarot Deck", but it was sold on ebay as "Peace Tarot". 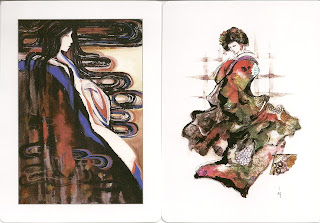