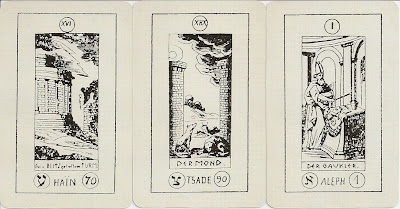 Notes:
Ernst Kurtzahn, who wrote under the pseudonym Daityanus was a member of various Rosicrucian and magical orders, and especially interested in Kabbalah. The cards were small (2 3/4 inches by 1 5/8 inches) and first published by Talis Verlag in Germany in 1920 in the book Der Tarot by Ernst Kurtzahn as black and white line drawings.The book was reprinted by Schikowski in 1983 and the cards were published as a deck in 2012 by HistoricalRetrospective.

Most of the designs are redrawn from Etteilla Tarot and arranged and titled in traditional tarot sequence. Two ofthe designs (VI Lovers and Xii Hanged Man) are taken from the Tarot of Marseilles.

In his book Kurtzahn states that his tarot is derived from Etteilla's Tarot, the Tarot de Marseilles and Oswald Wirth's Tarot. The Fool is numberd zero, The World is numbered XXII, no card is numbered XXI. The cards have Geramn titles and a Hebrew letter with its corresponding number at the bottom.

The book and scans of all cards are available online here