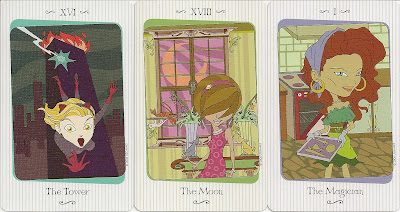 Notes:
The deck has been inspired by the heroines of pop culture. The Emperor shows a woman looking like Hillary Clinton as president of the United States. The Two of Wands looks like Sophia Loren as a chemist. The Eight of wands has Samantha from “Bewitched” riding with an escort of empty broomsticks.

The cards are smaller than most Tarot decks and measure 9,5 x 6cm. The fully reversible backs show a purple-striped background with blue stars. The deck comes  in a purple tin box. In the LWB each Major card has a little description of the image and a set of meanings for upright and reversed positions, the minors are listed by number.
Eingestellt von eno um 18:03