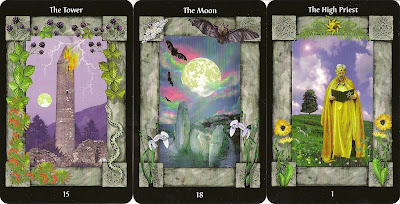 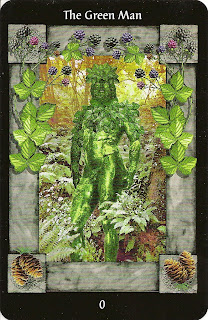 Notes:
Anna Franklin, a Priestess in the British Pagan Tradition, and graphic designer Paul Mason created a deck based on the idea (suggested by R. J. Stewart) that the Tarot had its origins with the bards of Celtic culture. Many of the Christian or Kabalistic symbolism has been removed and replaced with symbolism of the ancient Celts.The images on the cards are a composite of photographs taken of various sacred sites around the British Isles, combined with computer generated artwork and traditional drawing assembled in Adobe Photoshop.

The Major Arcana consists of - The Green Man [Fool], The High Priest [Magician], the High Priestess, The Lady [Empress], The Lord [Emperor], The Druid [Heirophant], the Lovers, the Chariot, the Warrior [Strength], the Shaman [Hermit], The Wheel, the Web [Justice], Sacrifice [the Hanged Man], Death, Initiation [Temperance], the Underworld [the Devil], the Tower, the Star, the Moon, the Sun, Rebirth [Judgement], and the World Tree [the World]. 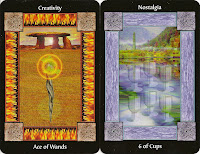 The suit of wands is associated with the season of summer, the wand, arrow or spear, the direction of the south, noonday, the element of fire, the power of transmutation, the spiritual impulse and the energy of creativity. The suit of cups is associated with the season of autumn, the cup, grail or cauldron, the direction of the west, twilight, the element of water, the emotions, intuition, psychic faculties and the growth of the spirit. 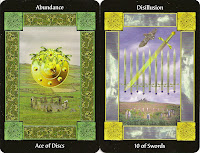 The suit of discs is associated with the season of winter, the disc, shield or stone, the direction of the north, midnight, the element of earth, practical and material matters. The suit of swords is associated with the season of spring, the athame of the magician, the direction of the east, sunrise, the element of air and the power of the mind.