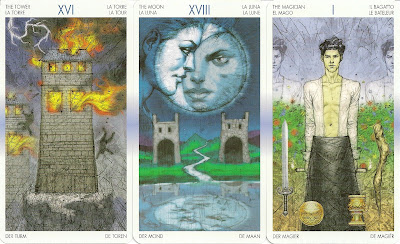 Notes:
Nearly every image of the deck has a reflection, though not always it is a precise mirror reflection of the image. They evoke the idea of reflecting something: not people or objects, obviously, but allegories of all kinds of situations of human life.

The major arcana in the Tarot of Reflections are traditionally titled, and order Justice at VIII and Strength and XI. The suits are the normal Wands, Chalices, Pentacles and Swords. The minors are not exact in scene but are similar in concept to the Rider-Waite.

Since the artist, Francesco Ciampi, is a cartoonist, some images of this Tarot deck slightly remind those from a comic book.
Eingestellt von eno um 15:28