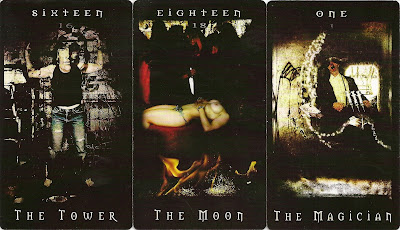 The deck has a standard structure - 22 major arcana numbered from to 21 and minor arcana suits of Pentacles, Wands, Swords and Cups. Its imagery is dark in both theme and colouring.

In the minor arcana suits,  Pentacles representing Earth and are softer and more sexual explicit  than the other suits. The Cups suit is Water and represents emotions. Wands representing Fire and are illustrated by firepower (guns). Several cards show suicide or killing.  The Swords feature blades and deal with mental issues and anguish.

It’s important to note that this deck is not identical to the limited edition release from 2005. The first edition was limited to 100 and came with a leather bound  booklet in a silver tin box, this edition is unlimited, with two  LWB (one for the Majors, one for the Minors) and  the cards are packaged in a tuck box.
Eingestellt von eno um 23:12