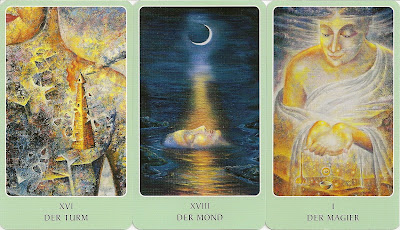 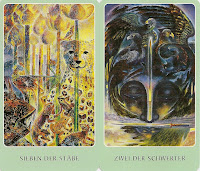 The deck is a standard 78-card tarot deck. The court cards consist of Pages, Knights, Queens and Kings. While the titles adhere to conventional Tarot, the card illustrations of the Roots of Asia are not at all like the illustrations associated with Rider-Waite decks

The art is oil on canvas. For his paintings the artist used unconventional tools such as his hands, knives, and rods. 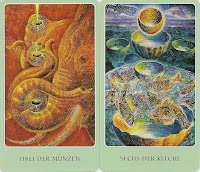 The deck's creator, Amnart Klanprachar, is an artist teaching at one of the major universities in Bangkok. According to the book that comes with the deck, he has spent the past 30 years dedicated to translating his understanding of Buddhist philosophy through the arts, and his paintings have been exhibited in various countries.

The 87-page LWB accompanying the deck, in addition to explaining the meanings of each of the 78 cards, includes information about chakras, general Buddhist philosophy, and an introduction to Insight Meditation.
Eingestellt von eno um 19:46