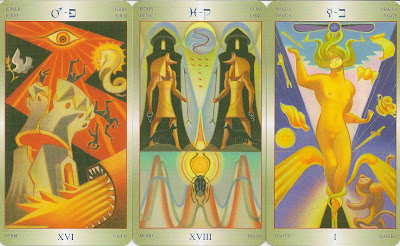 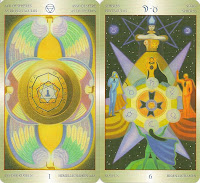 Notes:
The deck creator, Roberto Negrini, is an Italian Crowley expert. The artist, Andrea Serio, is widely known for his work on the Dante Tarot. The Liber T is a modern redendering of the images from the Crowley-Harris-Thoth but do not contain the emphasis on projective geometry that characterizes the Harris paintings.

Serio’s artistic reinterpretation has lost some of the symbolism in the Thoth images, especially the Golden Dawn color scale correspondences. 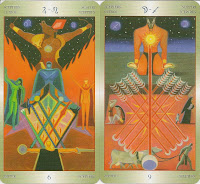 The Minor Arcana are also illustrated, using imagery compiled by Negrini (a  member of the Italian O.T.O.) based on his study of the Decanates.

The booklet attributes these Decans to the Egyptian Star Cult and gives them the name of SIBU SEPESU, or Eternal Stars -- hence the deck’s title. They are primarily derived from the Decan descriptions provided in the Liber Hermetis with a strong overlay of Thelemic-influenced Egyptian mythology and hints of the Ars Memoria. The minor arcana have four suits: Cups, Spheres (Disks), Scepters (Wands) and Swords.