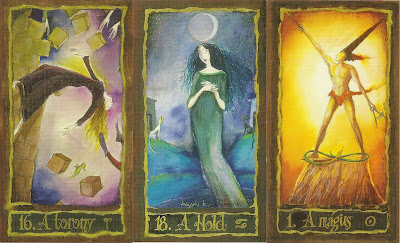 Notes:
This deck was originally created  in 1991 by the Hungarian illustrator Katalin Szegedi and came with an  accompanying book by Maria Szabo. Thus it was known as "Szabo/Szegedi Tarot". In 2010 it has been reprinted under the name "A Tarot Titkai"(which translates: Secrets of the Tarot). It came now with a little booklet, Hungarian only,  written by Zsofia Lazar

The new version has a better cardstock, a different back and brighter colors. Some cards, e.g. Justice  and Wheel of Fortune,  have a newly added artist's signature. Also some details are different, such as stars in the sky on the new version of The High Priestess.
Eingestellt von eno um 20:12