Tarot of the Holy Light 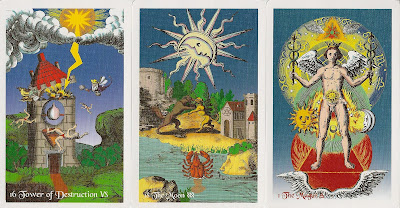 The Tarot of the Holy Light is a traditional Continental-style deck full of images like they are used in alchemical and hermetic texts. The associations for the trumps from this deck are keyed to the ideas taught by Ettteilla and Papus. The Pips and Court Cards are distributed in a classic astrological pattern. The signs, planets, and elements that rule them are marked on each card.

The traditional names have been used for the Major Arcana, with the following exceptions: Magus (Magician), Priestess (High Priestess), High Priest (Hierophant), and Tower of Destruction (Tower). Justice is VIII, with Strength at XI. The suits are Wands, Cups, Swords, and Disks. The Court Cards are Queen, King, Knight, and Page.On the Queen of Swords are the Initials of Christine Payne-Towler.

The card backs are done in black and white, with a Sun  in each corner.  At first glance the backs are reversible, but by looking closer one could tell if they were upright or reversed. The backs show some sort of a doorway into the cosmos, with the Sun representing the material world, and the Moon representing the celestial world.

The box features art by Patrick Dowers, which is in a very different style to that of the deck. The cards themselves are 3” by 5”, with a linen texture. The LWB contains brief, Etteilla-based interpretations and spread suggestions. It is a limited edition of 1224, only 200 were signed and numbered. I have an unsigned one.
Eingestellt von eno um 19:31