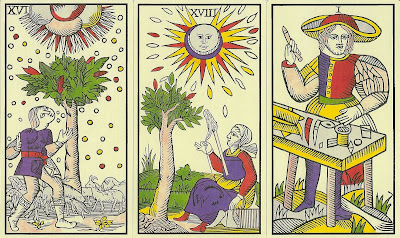 The deck  was made around 1650 in Paris by cardmaker Jacques Viéville, who was active from 1643 to 1664. The technique used by Viéville for the making of this tarot was woodblock prints, coloured by means of stencils.

The Tarot of  Viéville was created in the same time and place as the Jean Noblet Tarot, but is quite different. Many cards do match the cards in the Tarot of Marseilles tradition but the Tarot of Jacques Viéville seems to also be related to  the "Belgian Tarot", the "Tarocco Bolognese", and The "Ferrara" Tarots.

The Tarot of Viéville has no titles on the cards and the numbers seem as if they were added to the cards images and forced into place in available space rather than as part of the design. Nearly all the subjects of Viéville's tarot look towards the opposite direction faced by the ones of Marseille,  the engraver for Viéville presumably "copied" this tarot in reverse, using the "right" side of an old printed sheet as model. This edition of the Viéville majors presents them as they appear in the original deck and includes a mostly reversed option as well.
Eingestellt von eno um 15:35