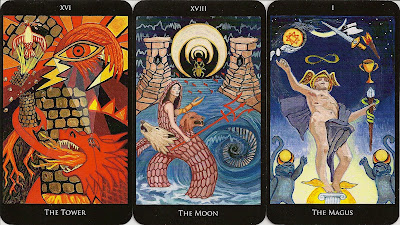 Notes:
The  name of the deck is referring to the Rosetta Stone, a fragment of an ancient Egyptian granite stele discovered in Rashid (Rosetta) and dating to 196 BC. The slab is inscribed with three identical scripts in Ancient Egyptian hieroglyphs, Demotic text, and Ancient Greek and proved to be the key to decoding the previously unknown Egyptian hieroglyphs. In the same way that the Rosetta stone ties together the languages of these cultures, the Rosetta Tarot is intended to combine  Egyptian symbolism and Greek mythologies with alchemical symbolism.

The cards measure 7.1 cm x 11.2 cm. The backs of the cards are reversible and the background is a dark blue. They feature a red rose and a cross design that represent the four elements.

The suits are Wands, Cups, Swords and Disks. The Major Arcana have titles that match Aleister Crowley’s Thoth Deck.   Adjustment (Justice ) is number 8 and Lust (Strength ) is number 11. The Court cards are titled Princess, Prince, Queen and Knight. Wands are associated with fire and Swords with air.  Most of the minor arcana cards are closely based on the Thoth symbolism with some slight variations.

The cards are packaged in a fold out box that opens on the horizontal. The box also contains an informative 56 page LWB. There is a face card that is numbered as one of 777 and signed by the artist. Mine is number 137. Also included is an extra card with my name in hieroglyphs.