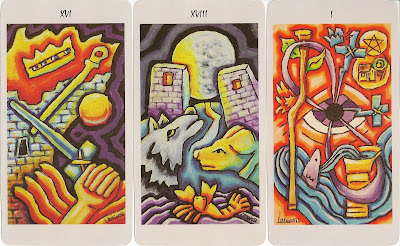 Notes:
Unlike many self-published decks, the Langustl Tarot isn’t handmade or homemade – the cards have been professionally printed, cut and boxed. The cards are  printed in 8cm by 15cm, big enough to see the texture of the paper and the acrylic paint. They are surrounded by thin grey borders, titling is basic, with roman numerals on the majors and a number and suit symbol on the minors.

The cards are non-traditional in imagery but traditional in titling,ordered in the European style - Justice is VIII and Strength is XI – and using the standard Rider-Waite suits of Wands, Swords, Cups and Pentacles. The backs have a reversible check pattern with a grey line-drawn flower. 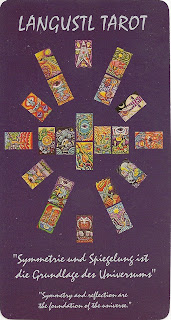 The artist tried to find the common foundation in the works of Waite and Crowley, and the disparate systems of numerology, Kabbalah and astrology. He pulls these together in his paintings, the tarot scenes in close focus with an emphasis on shapes and colours and the major elements of the cards, rather than realism or fine detail.

The cards are unusual in that they only feature people on the court cards - the majors and pip cards use hand gestures and colour instead of body language but convey the meaning just as effectively. The colours are roughly analogous across the suits; swords use cool colours; pentacles lively primary colours; cups purples and pinks; wands are red/orange.

The set includes the 78 tarot cards, a title card,  a  card signed by the artist and 32-page booklet in German and English.
Eingestellt von eno um 16:18