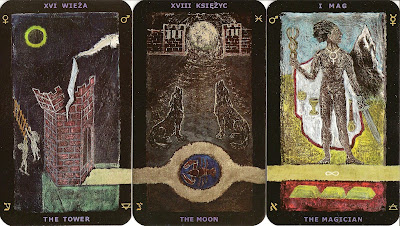 
Notes:
"Droga" is Polish for "road", and - laid out in two rows- there is a road connecting all the major arcana. The Majors can be arranged in different ways showing different roads through the arcana (compare with the Minotarot where Provoost had done a similiar thing). The majors have a roman number and a Polish title at the top and an English title at the bottom. The images for the major arcana were created as hand-made fired glazed clay tablets, which were engraved by scratching out lines. Then they were painted and the result photographed.

The minors have a Polish title at the top and an English title at the bottom. There are no roads in the minors but each suit has a characteristic colour. The backgrounds are formed by digitally mixing photos of engraved clay images and images of fire, water, sky or stone.

The first print-run of the Tarot Droga is limited to 100 decks, the edition is not numbered but came with a signed card and an exhibition catalogue instead of a LWB.