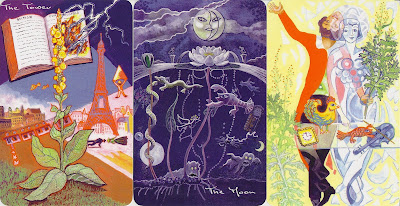 The Wild Green Chagallian Tarot is the third deck from Penelope Cline, creator of the Pen Tarot, and was inspired by both the paintings of Marc Chagall and by plants and weeds found growing wild.

The images for The Wild Green Chagallian Tarot were painted in gouache on heavy watercolour paper. The titles were handwritten and added digitally later, and the cards are un-numbered.

In addition to the twenty-two cards of the major arcana and the title card, there is one extra card - The Muse. The Muse represents Bella, Chagall’s love, wife and muse, and can be interpreted as 'Inspiration'.

The cards are borderless with rounded corners. The reversable backs feature a pattern of leaves and a Chagallian bird by its nest of chicks. The title card features a whimsical angel holding a titled scroll, with the same bird and nest on his head.

The title card is signed and numbered on the back underneath a poem by the artist.

Each set comes in a black box, the lid of which has been covered with leafy green hand-made paper and decorated with a snail. Each box is individual. A sheet of the same hand-made paper sealed with a leaf sticker ensures that the cards are safely tucked in.

This signed and numbered edition is self-published and limited to 100 sets.
Eingestellt von eno um 19:07