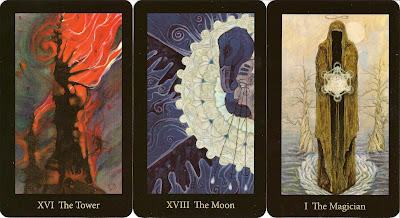 Notes:
The name Mary-el came from a contraction of Mary, a name often used for the feminine god principle, and also the root of the artists name Marie, and El an ancient Semitic name for God. The cards are created as traditional oil paints.

The main concept behind this deck is achieving a balance between male and female energies. The alchemical interaction (coming together, merging, dividing, etc.) between opposing forces permeated the whole deck.

Mary-el Tarot is clearly inspired by the Crowley Harris Thoth. Justice is numbered as Key 8 and the suits are Wands, Cups, Swords and Discs. The Court follows the RWS standard, with Pages, Knights, Queens and Kings. Not all Court cards picture an individual human, and the pip cards do not include suit icons. The traditional archetypal images that is associated with Tarot are not present in the Mary-el Tarot. It would be difficult to figure out which card was which without seeing its name.

In the 192 page companion book – “Landscapes of the Abys”, the cards are presented with black and white scans, a discussion of the card, and the imagery used, upright and reversed keywords, and traditional divinatory meanings.

White started creating these cards in 1997, self-published the Major Arcana in 2003 and 2012 it is finally being released by Schiffer Books.
Eingestellt von eno um 14:18