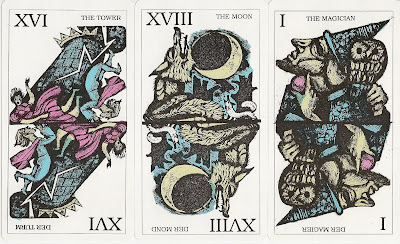 The Erde Tarock is a Marseilles-based deck with reversable drawings. The title translates into English as 'Tarot of Earth.'

It was created as a limited edition of 500 copies, signed by the artist on the sleeve of the package. The deck was printed by Wolfgang Schuboth in Malchow, Germany in black, green, blue and pink.

The images are 'double-ended,' like the King, Queen, and Jack of a standard playing card deck. The Majors

The deck includes a presentation card and a blank card, it came without a LWB in a wrap-around green cardboard box. The backs have a pattern of stylized rosettes in green. The paper is thinner than tarot cards usually are.
Eingestellt von eno um 04:45